The Story Behind Calm Before The Storm 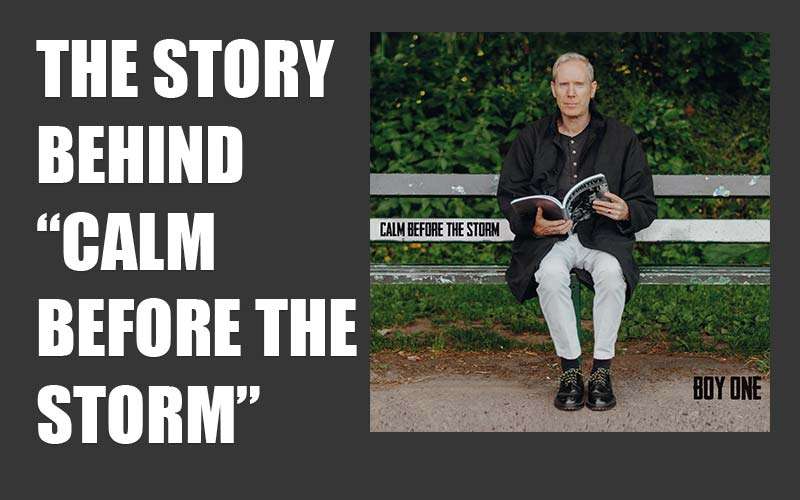 “Calm Before the Storm” Sessions

Like my first album, most of the songs for ‘Calm Before the Storm’ were written years earlier and were just lying around unloved in my bedside locker. I started laying down the backing tracks in my home studio in 2019 in Poddle Park. I had about five backing tracks completely when my computer gave up and I hadn’t got the tracks backed up.

I left the computer around to a local shop but they had it for about three months before I got it back and it still wasn’t back to normal.

I Lost Everything and I Had To Start Over

I had to start all over again. The first track ‘Too Blind to See’ was inspired by a lost weekend in Hamburg many years ago. My old comrade George from the Vipers had invited me over to Hamburg to play a blues gig in some club. After a hurried rehearsal in the hotel room with the drummer (playing his drumsticks on a chair) and the singer, we then headed down to do the gig only to find out that the venue was a jazz club and they wouldn’t let us play! That left us no alternative but to sample the nightlife.

The track ‘Footprints in the Sand’ is a nod to the old glam rock days. I always liked that Glitter band-Bay-City Rollers pounding drum beat on their records and that was the basis of the track. Just a simple summer love song with Beach Boys type backing harmonies thrown into the mix.

‘Richest Man in the World’ is probably the oldest track on the album. I wrote it originally in the late ’80s and it went through a number of mutations before I finally got it onto the album. The title was inspired by the fact my sister Marie once worked for the Sultan of Brunei back in the ’80s and he was reputed to be the richest man in the world at that time. Niamh Payne did backing vocals on the last chorus and it gave it a nice lift.

The Single and The Video

I released the track ‘Broken Skies’ in 2020 as a single and then remixed it for the album. Conor Brady, my old buddy from the Blades came up with some lovely guitar parts for the song. One of the busiest session men around, he recorded them in his own studio and sent the files over to me which got around the lockdown nicely.

A Letter from Sir David Attenborough

I made a video for the single and I wrote to Sir David Attenborough asking him for permission to use some of his ‘Planet Earth’ footage. The gentleman that he is, at the age of 94, he took the time to write me a handwritten note explaining that the BBC owns all the copyright to his work. I didn’t mind. I was more chuffed to receive a letter from the great man.

The track ‘Is This All There Is?’ started off as a Squeeze-type kitchen sink drama but somehow it went south and ended up with a Latin feel. Frank Duff from the Blue Brass arrived over with his trumpet in between lockdowns and did the lead trumpet part and also all the harmony trumpets. With the Latin feel to the track I decided to add a Spanish talking section. Jessy Berenice, a young Bolivian woman now working in Dublin obliged me by coming in and talking over the track.

I decided to get in a female vocalist for the track ‘Can’t Love No One But You’. I had spent ages doing the string arrangement and felt it needed a big voice to give it a lift. Niamh Payne didn’t disappoint and put her own unique stamp on the melody.

She also duetted with me on ‘The Worst is Yet to Come’ and did some great backing vocals and harmonies on the song. This was the only song I wrote during the whole Covid period and I felt I couldn’t really release the album without some observation on what was happening around me.

I always liked the sound of the pizzicato strings on the Buddy Holly records and I tried to use the same effect on the track ‘A New Start’ juxtaposing this with a modern drum beat and an acoustic guitar solo.

Regarding the drum patterns, Pat Donne, the producer took care of all that. I’d only have to say, ”give this track a Latin feel” or ”give this track a glam rock feel” and he’d have it nailed. On some tracks, he’d throw in a few Ringo fills or on other tracks, some Mick Fleetwood fills. He also played a bit of pedal steel on ‘Richest Man’ and came up with the idea of harmony trumpets on ‘Is this all there is?’

He also recorded all my vocals and came up with ideas for different harmonies. With Niamh, he really pushed her into some uncharted territories in sections of her vocal lines and the end result proved him right.

So, all in all, a pleasurable experience making the album, and even though the daily news was full of negativity and hopelessness I hope the album doesn’t engender the same emotions.

Available in the Following Record Stores