The Passing of Paul Boyle 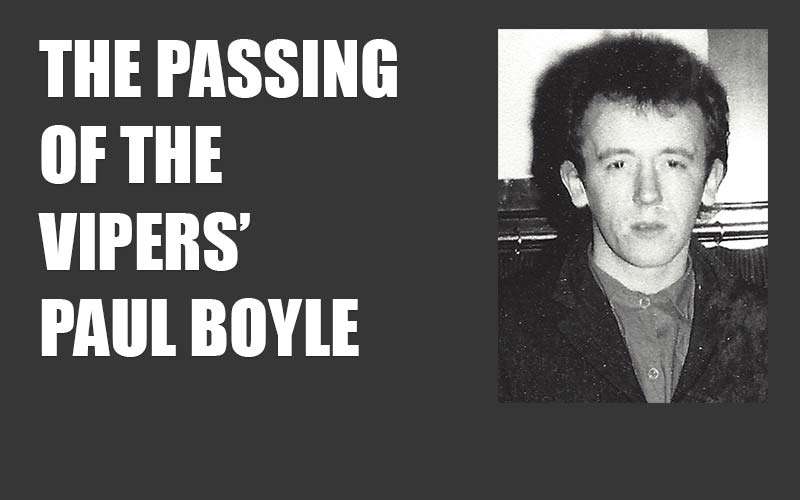 I only learned yesterday of the sad passing of Paul Boyle, lead singer with my old band the Vipers. We had lost contact with him while he was living out his days in London but it was still a shock to learn he had died in 2019 and that the news has only filtered out now.

Paul was not the easiest of people to get on with and he seemed to have a permanent sneer on those thin lips of his which fitted right in with those heady, punk-filled days of the late ’70s.

Underneath it all though he was very well-read and very intelligent. He was a huge Beatles fan but I remember him telling me once he’d have given anything to see Frank Sinatra in concert.

Dressed to Kill with an Attitude to Match

Paul was always immaculately dressed. He had the skinniest jeans and the pointiest shoes and an attitude to match. It helped I suppose that he had an older brother, Billy, who gave him his old wardrobe of hand-made 60’s suits and accessories. And the odd sheepskin jacket!

He was younger than me but he was always an old head on young shoulders. I remember one day the band had a meeting with some big American music publisher in Denmark street called Hal Shaper. Hal had written songs that were recorded by everyone from Matt Monroe, Shirley Bassey, Bobby Darwin, etc and here he was trying to get the publishing rights to the Vipers songs! I sat there mute as Paul pulled apart Hal’s publishing offer to us. I think Hal had assumed we’d just show up and sign on the dotted line. But no, Hal had met his match in this skinny northside Dubliner.

A Treasured Gift from Paul

Paul wasn’t driven to acts of kindness too often but I do remember he surprised me with a birthday present one year; A copy of Wayne County and the Electric Chairs banned single ‘F—- Off’. A strange gift, but I still have it and it’s a collector’s item now! Thanks, Paul.

Anyone of a certain vintage will remember those heady days of 1977 when the Rats, the Radiators and the Vipers drove a stake through the heart of prog rock in this town and things would never be the same again.

The Vipers were formed by Paul Boyle and drummer Dave Moloney (Dave had actually been a member of the Boomtown Rats for a short period).

Myself and guitarist George Sweeney joined the definitive lineup of the Vipers in 1978. And just as you never forget your first kiss, I’ll always treasure those magical times when I joined the Vipers.

Many Firsts With The Vipers

It was my first proper band. It was the first time I entered a recording studio to make a demo. First time seeing my name in print. First time releasing a single, First time on television.

We did support the Jam and the Troggs. We toured England with the Boomtown Rats and Thin Lizzy. We even recorded a John Peel session. All in the space of a year of me joining the band. Heady days. And all thanks to the songwriting prowess of singer Paul Boyle, we rode the surf of the new wave. Paul Cleary from the Blades always acknowledged the Vipers as one of his favourite Irish bands. He hoped we may reform one day and share a bill with the Blades.

Whiskey and coke was Paul’s tipple of choice. In England it was a double whiskey and coke….he thought the English measures were too small.

Time to break open that old bottle of Jameson I’ve had knocking around this last while and stick on our old vinyl masterpiece ‘I Got You’.