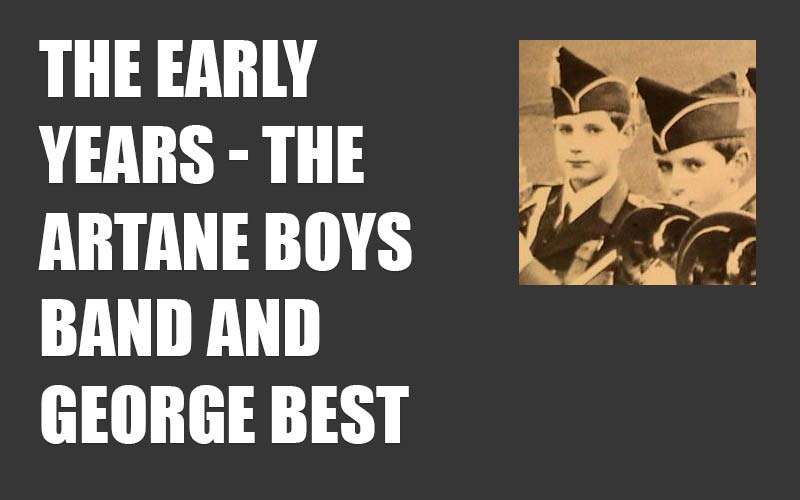 Man on a Black Bike

The first instrument I ever learned to play was the piano when I was around seven years old. We lived in Artane, a Northside suburb of Dublin, and an old guy named Mr. McKenna used to call around to the house every Sunday and give lessons to myself, my brother and sister.

He was a scruffy old man with greased back hair, rotten teeth and a woodbine permanently stuck in his mouth. He used to arrive on an ancient, black bike and by the end of the lessons the ashtray would be piled high with cigarette butts and there would be what looked like a fog in the room along with a nauseous smell of stale tobacco. My mother would leave all the windows open for about three hours after he left. He wasn’t a very empathetic teacher and he didn’t like children so it was no surprise when we all gave up the lessons.

When I was twelve years old, myself and my twin brother Seamus joined the Artane Boys Band. The old industrial school was being phased out so they reached out to all the schools in the neighbourhood and recruited boys to replace the orphans and abandoned kids who used to make up the band.

It was a cold, foreboding place with high walls. At one time they had nearly 900 boys incarcerated there, most of whom were in for petty offences.

The Industrial school had its own laundry, kitchens, bakery, school, church, and shop. They grew their own vegetables, made their own clothes (drab, grey worsted jackets and trousers) and had their own farm. And of course, they had the band.

The boys who had musical talent were the lucky ones who got to join the band and had a slightly easier existence than the rest of the poor unfortunates.

I chose the clarinet as the instrument I wanted to play in the band. My brother Seamus somehow ended up learning the xylophone. We used to rehearse twice a day five days a week. We would come home from school and head up to rehearsal from 5 00 till 6.30 and then back again from 7 30 till 9 00.

A and E’ed by Napoleon Solo

After a few weeks, the Christian brother in charge let me take the clarinet home. I liked the way you could take the instrument apart and slot it neatly into a velvet-lined small case.

One weekend Seamus and I went to the cinema to see a ‘Man from U.N.C.L.E.’ film and when we got back home all enthused with the spies and the gadgets, Seamus suggested that I get my clarinet case (which looked like a secret agent’s case), and that I be the Russian spy and he would be the Napoleon Solo, the American agent.

Rising to the task, I crept down the stairs with my trusty case and tip-toed into the sitting room whereupon Seamus came out of nowhere and with one kick I found myself writhing around the floor in agony. He had fractured my finger on my left hand. Off I went to the hospital and came back with my hand in a  bandage and my fingers in a splint for good measure.

The next day I had to explain to the Christian brother that I wouldn’t be able to play the clarinet for six weeks.

He motioned me towards him and led me down to the band room whereupon he produced a trombone and told me I could learn to play that, splint or no splint. He was right. My left hand just had to rest on the instrument while all I needed was my right hand to operate the slide and produce the notes. Still, I found it to be a large, awkward instrument compared to the nice, neat little clarinet. And also, I didn’t like the trombone case; It was heavy and misshapen. It would never be mistaken for a secret agent’s case, that’s for sure.

I was taught to play the trombone by Anthony; probably illegitimate and thrown into Artane to atone for the sins of his mother. He would hold two pins on either side of my cheeks as I blew into the trombone and this was my introduction to playing a brass instrument. I think he took a certain delight in my discomfort.

Years later I was working hard, covered in dust and sweat, pulling a heavy cable through the ceiling of a bank when I spotted my old tormentor, dressed in an expensive suit and obviously holding down an important position in the financial sector. We exchanged pleasantries. I was glad one of us was doing well.

The Artane band played around 50 gigs a year. They ranged from being a marching band in Croke Park at the football and hurling matches to playing up in bandstands such as the Phoenix Park when the horse racing was on and then there were also concerts outside Dublin.

There were some prestigious gigs which I didn’t get to play at as there was a pecking order in the band and the better-behaved lads got picked. Gigs such as welcoming Dana home at Dublin airport after she won the Eurovision. And then there was the time President Richard Nixon made a visit to Ireland in search of his Irish roots in Wicklow and the band were wheeled out there as well.

We  played up and down the country. At indoor concerts my brother Seamus would be wheeled out to perform one number on the xylophone called ‘On the Track’. He was so small that they had to bring out a wooden box for him to stand on so he could play.

Outside in the open air, in all weathers, we had to learn to march in military-style and play our instruments at the same time.

One particular gig stands out for me; The time we were booked to play outside Penney’s department store on Henry Street in Dublin in 1970.

Also appearing was soccer legend George Best who was to perform the grand opening of a new food hall in the store. We arrived early and there was a small crowd waiting outside the store. However, it didn’t take long before the crowd started to swell and soon there were people the length and breadth of Henry Street.

George eventually arrived in a white Rolls Royce accompanied by his latest girlfriend and the car was mobbed.  As he got out of the car the crowd surged forward and we got swept along in the mayhem. Two policemen had to fight their way through the mob to get George into the store safely.

George Best Quote: “I spent a lot of money on booze, birds and fast cars. The rest I just squandered.”

Needless to say, we didn’t get a chance to play a note as we abandoned the scene clutching our instruments and making a dash for it.

Later we heard that five women had been admitted to hospital after being caught up in the crush. There were abandoned children waiting to be collected at the police station and George’s Rolls had been severely damaged. All in all probably a normal day in the life of Georgie.

Another time we got roped into making a commercial publicising a Cadbury’s chocolate bar called  ‘Curly Wurly’.

There was a popular sitcom on the BBC at the time called ‘Terry and June’ and the lead actor Terry Scott, a slightly portly comic actor was drafted in to be part of the band for the ad. And of course, he had to produce that all-important curly wurly bar at the opportune moment. Again ..and …..again …..and ……again till the director was satisfied.

When Gods Walked The Earth

The only time I enjoyed being in Croke Park was in July 1972 when we played before the Muhammad Ali v Al ‘Blue’ Lewis fight and got ringside seats later. Ali was a big hero in Ireland. His five-year jail sentence for refusing to fight in the Vietnam war had recently been overturned and he was free to fight again. His opponent Al Lewis wasn’t the most tantalising opposition; a low ranking boxer who had been recently been paroled from prison on a murder charge.

At least he got as far as the eleventh round before Ali won with a technical knockout much to the delight of the crowd. It was just another stepping stone for him on his way to regain the world title again.

Ali and his entourage were staying out in a newly opened hotel; Opperman’s Country Club, in Kilternan, outside Enniskerry. My dad brought myself and my brother over there and we got Ali’s autograph after queueing up behind a long line of other fans. I still have the autograph which I put in a frame and it reminds me of those far-off days when I was in the presence of the most famous sportsman in the world.

By the time Seamus and I were sixteen we had outgrown the band and were happy to leave. We handed back the keys of our lockers which contained our uniforms and left our instruments back in the band room. These instruments would be passed on to the next generation of youngsters to enroll and so carry on a tradition that had started in 1872.

Looking back, I must admit that we both got an invaluable musical education and experienced the thrills and spills of performing and touring around the country.

Those happy memories, needless to say, grow dimmer with each passing year.

* A special thanks to Sean Walsh at Irish Photo Archive for the use of the George Best and Muhammad Ali photos. Please visit www.irishphotoarchive.ie to see more amazing Irish photos.