The Blades…. A Cut Above The Rest 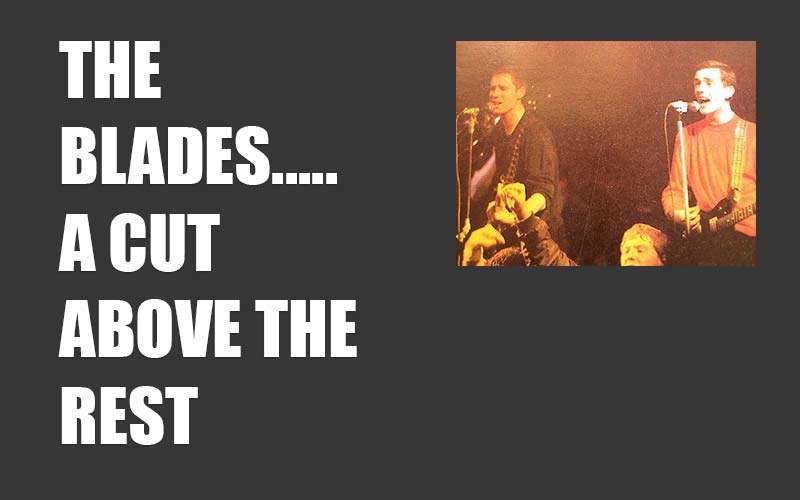 The First Time I Heard The Blades

When I was living in London with the Vipers we started hearing about this new band in Dublin called ‘The Blades’ and how one of their favourite bands was the Vipers. We had a lighting technician, Sean Duffy, who arrived back from a trip to Ireland and one evening we met up with him and he played us The Blade’s debut single ‘Hot for You’ and I remember thinking the singer had a really great voice. I came back to Dublin for Christmas, December 1979 and caught the end of a Blades gig in the Mansion House. I thought they were really tight and had a great pop sound for a three-piece. I introduced myself to the band and that was my first meeting with The Blades.

One Door Closes, Another One Opens

By 1981 the original drummer Pat Larkin left The Blades. The previous year they had released one of the best Irish singles ever; ‘Ghost of a Chance’.  Jake Reilly replaced Pat on drums and then Paul decided that he would switch from bass guitar to rhythm guitar and that’s how I came to join on bass. I had left the Vipers and was living back in Dublin. So the band became a four-piece with Paul on vocals and guitar, his brother Lar on lead guitar, Jake on drums and me on bass.

Our first single as a four-piece was ‘The Bride Wore White’ A gritty pop gem detailing a young, unmarried girl’s dilemma and the stigma attached in holy, Catholic Ireland. The late Bob Collins in RTE made a great black and white video to go with the song. We filmed it around the Liberties. The building we used for most of the song was about to be demolished but words were spoken or maybe money changed hands but the next thing we knew the wrecking crew disappeared and we set our gear up and got the filming done. The next day the building was torn down.

The Introducion of a Brass Section

The introduction of Frank Duff on trumpet and Paul Grimes on trombone to the band was exciting but it also came about due to another upheaval. Original member, Paul’s brother Lar left the band and that really set us back but then Paul wrote a new batch of songs. They were full of amazing brass arrangements and so we re-emerged even stronger as a five-piece; On the posters, it read; The Blades featuring the Blue Brass. Our next single was ‘Revelations of Heartbreak’. A brass-infused slice of pop magic. It had the raw energy of punk and the pop sensibility of Motown. It never failed to fill the dance floor when we were gigging.

In 1983 ‘Downmarket’  was released as a single and was produced by Bill Whelan.  We would record a more powerful version a year later for our album and this is the track that most people relate to. Forget about ‘Summer in Dublin’, if you want to know what it was like to live in Dublin in the early 80’s then this song encapsulates the greyness, the misery and the lack of hope. Nearly forty years later the song still resonates with many people and is usually the climax to any Blades gig. A timeless classic.

The Promise of a New Record Deal

In 1984, the Blades signed with American record company Electra. We headed off to London and rehearsed the songs with the producer John Porter, (who had produced the first Smiths album) in  NOMIS rehearsal studio (owned by Wham’s manager Simon Napier Bell). In other rehearsal rooms were bands like Culture Club and Talk Talk. I bumped into our old roadie, Sean Duffy at NOMIS, he was working for Talk Talk at the time.

While we were recording the album, Electra then sacked their A and R personnel including Andrew Loog Oldham who’d signed us to the label. As a consequence, our album ‘Last Man in Europe’ was never released on Electra.

However, we had kept the distribution rights of the album in Ireland to the small Irish label Reekus records who had released our last three singles.  It would never have seen the light of day only for that. Of course, there was no money to promote it so what should have been our day in the sun turned out to be our swansong.

The title track of the album ‘Last Man in Europe’ was released as a single. It was an explosive piece of pop craftsmanship. Starting with just a simple two-note riff on the guitar it was then propelled by a furious drum intro and an anthemic brass melody that served as an opener for every Blades gig after that. However, with the album not getting any major exposure, we seemed to be gigging around in ever-decreasing circles. In order to recreate the sound of the tracks on the album, we hired a young piano wizard from Belfast, Pat ‘Fitzy’ Fitzpatrick. We also brought in young hotshot guitarist Conor Brady as cover when our Blue Brass couldn’t make a gig. With no major record label behind us we were reduced to the same old well-trodden circuit.

Our final single was another track off the album; ‘Those were the Days’ was a downbeat tale of fear and drudgery in a typical Irish Christian Brothers school underscored with a gentle reggae beat and a plaintive vocal. It shone a light on a more gentler side to the Blades and showcased one of the best lyrics Paul had ever written. In 1986 we released a compilation album called ‘Raytown Revisited’ which had some singles, B sides and unreleased demos on it. And then the Blades bowed out with a few farewell shows.

When it comes down to it the records are there to savour and for a few brief moments, we shone in what was a grey, dark era on this godforsaken island.

Though as far as I’m concerned the Blades were all about the gigs first and foremost. We used to travel up and down the country, hit a town, turn the amps up to eleven and destroy whatever ecosystem was in place with our strings, sticks and brass.  We’d come off the stage and there’d be skin stuck to the guitar strings, blood on the fretboards and a gallon of sweat dripping from our shirts.

Maybe U2 had three chords, the truth, and God on their side but we had white socks, black loafers, and the ghosts of Jim Larkin, George Orwell and Sam Cooke guiding our souls. One infamous gig I remember was the RTE-sponsored ‘Lark in the Park’ in St Anne’s Park in Raheny. It was a pleasant Sunday afternoon, children out with their parents picnicking on the grass. There were three bands on before us; ‘the Rhythm Kings’, ‘Some Kind of Wonderful’ and a synth duo whose backing tapes kept speeding up due to power surges from the outdoor generator.

Prison Haircuts and Scowls to Match

Then it was our turn to take to the stage. Prison haircuts, and scowls to match. One two three fourrrrrrr Opening guitar riff from ‘Last man in Europe’, bass drum off the Richter scale, deep rumble of the bass, and then the brass went straight for the jugular as Paul sliced through the crowd with some power chords.

Every disaffected youth from the Northside of Dublin had shown up and no one had thought to put up crash barriers. The PA was rocking back and forth precariously. The RTE crew were trying furiously to link arms at the front of the stage but to no avail. Mothers held their babies close to their chests as they made for the exits.

The stage got invaded. We tried to do a slow song to calm things down but the plug got pulled anyway. To us this was just another gig. Maybe a little bit more raucous than normal.  Though looking back at it now with the benefit of hindsight it was a miracle that no one got seriously injured. It was strange but there was something about our gigs that just seemed to galvanize particular groups of teenaged, acned youths.  In the TV club there’d be over 900 souls stuffed into the place and you could see the steam rising and feel the floor moving with all the mayhem and just when you thought things couldn’t get any more insane there were always a few kids that would jump off the balcony just for good measure.

At the Baggot Inn the fans that couldn’t get in used to dance outside in the rain while singing along to the songs. It was even more surreal outside Dublin.  We used to play in the AOH (Ancient Order of Hibernians) hall in Dundalk. The bouncers were all ex-boxers and they were forced to relive their glory days when the mods arrived en masse. Those bouncers didn’t know what hit them.

Ah yes, those were the days.

Alas, our incursions into the heartland would become fewer and fewer and our blessed brand of soul was now considered redundant by the men in suits.  A floppy fringe and a Casio keyboard were now the required tools of the trade. ‘The Human League’, ‘Depeche Mode’ and ‘Soft Cell’ were coming over the horizon. The machines were taking over. The funny thing is, it had all been foretold in one of the greatest pop songs ever committed to vinyl; “Not a ghost of a chance….we never had.“

Watch videos and read more Blades stories on my blog.