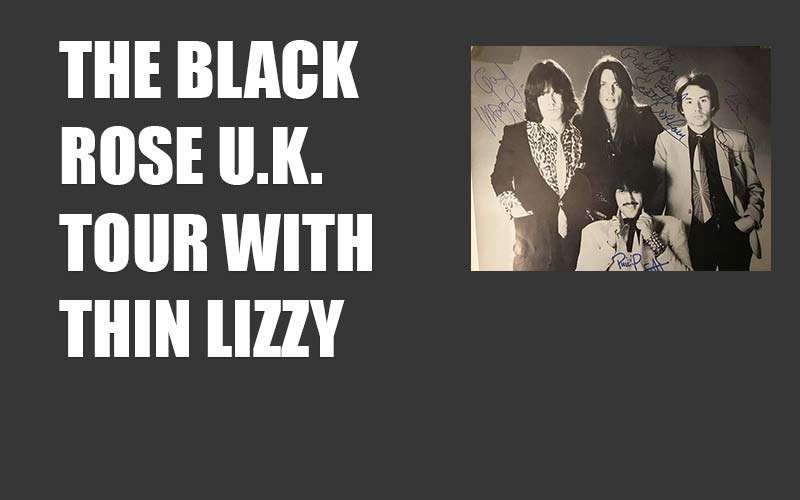 The Brown Van, the White album and the Long and Winding Road.

It was almost like a storyline from the sitcom ‘Only Fools and Horses’. Our roadie-tour manager-driver Dave the Rocker pulled up in what was going to be our transport for a 26 date trek around the length and breadth of Britain supporting Thin Lizzy. Dave stepped out of a brown-colored, high-sided, furniture removal van and said rather sheepishly, “It was all I could get at short notice”.

A bit crestfallen, we lifted our amplifiers and instruments into the back and then citing seniority, Dave (drums) and Paul (singer) jumped into the front with Dave the Rocker. George and myself climbed into the back of the van, which was completely sealed. No windows and no access to the cab at the front.

The only thing that saved our sanity was George had the foresight to bring his portable stereo and vinyl records with him. Four hours later and we still hadn’t got out of London due to heavy traffic. After we had played his whole Doors collection cabin fever started to set in.

With a manic look in his eyes, George took out his Beatles ‘White album’.  He kept playing one track; ‘Helter Skelter’. Over and over. Every time McCartney let out his blood-curdling scream halfway through it, we would join in. It didn’t help matters that every time Dave the Rocker hit the brakes, the backline would slide up towards us, and then gradually slide back again.

All I remember is at one stage myself and George getting hit in the head by a stray drum, while screaming along to McCartney and kicking the partition leading to the front cab. It wasn’t long before the van stopped. The back door slowly opened and Dave the Rocker peered in. He hurriedly flung a few cans of beer in at us, like he was feeding a pack of hungry dogs and then he quickly slammed the door shut again. . I remember thinking to myself; Wow, it doesn’t get much better than this.

We Nearly Missed The First Gig

Not allowing for the heavy traffic in London meant we were hours behind schedule trying to get to our first gig in the Brighton Pavillion. We literally arrived five minutes before showtime. We’d missed the soundcheck. The Lizzy tour manager wasn’t too happy. He’d somehow gotten a local Brighton band at short notice and they were ready to do support when we arrived. We had five minutes to get our gear onto the stage and start playing. The poor guys from Brighton had to get their equipment off the stage while we set up.

We launched into our first number and George’s amp blew up. It didn’t get much better after that. The Lizzy fans didn’t like us. To them, we were punks or new wave or something and we didn’t play long guitar solos.

Phil Was a Gentleman

Phil, to his eternal credit, tried to give Irish acts a helping hand. ‘The Radiators from Space’ had done a British tour with Lizzy previously and they got the same reaction as us. One of the shortest gigs we played was in Bingley Hall in Stafford to around 10,000 Lizzy fans. Our singer got bottled off during the first number and we cut the set short and made our way back to our dressing room only to disturb Philo and some female journalist in a compromising situation. He wasn’t expecting us to be back so soon.

Still, it was a great experience playing all these famous venues such as the Manchester Apollo, the Birmingham Apollo, the Liverpool Empire and the Hammersmith Odeon in London among others. We did some good gigs and we learned to ride the hostility and enjoy ourselves on stage.

When Phil found out we had no record company or manager he arranged for the merchandise company to manufacture a consignment of Vipers t-shirts complete with our logo on it. He also insisted we stay in his mother’s hotel, the Clifton Grange, when we played in Manchester. He was very generous to us.

Guitarist Gary Moore was drafted in for the Black Rose album and tour and he travelled separately from the rest of the band. He would arrive early at each venue and turn up his amp and practice while the road crew assembled the stage around him. Every night we would watch Lizzy from the side of the stage and admire their professionalism and the sheer power of their songs. Phil was one of the most charismatic frontmen I’ve ever seen.

Looking back on it I don’t know how myself and George survived 26 dates in the back of the old furniture van. I suppose George’s vinyl collection kept us sane. It wasn’t a bad collection; the Doors,  the Who, Elvis Costello, Nils Lofgren, Free, Nick Drake, the Beatles…..