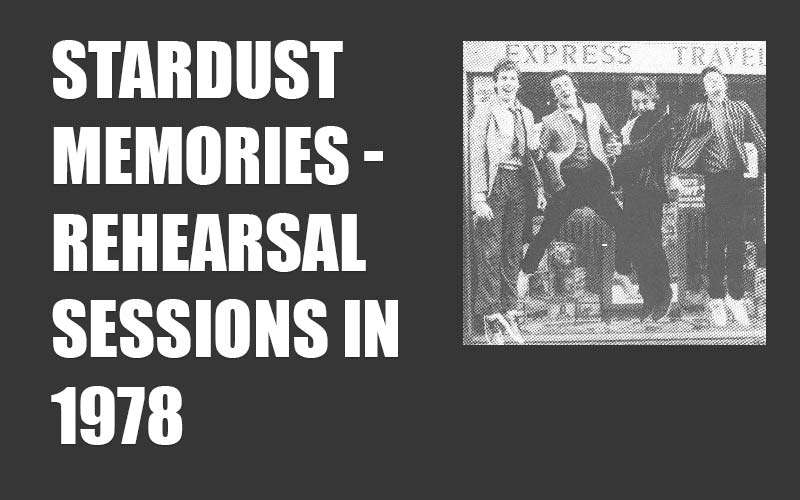 In November 1978 the Vipers signed a record deal with a small Irish folk label called Mulligan records. They agreed to release our first single. Mulligan had somehow gotten the rights to release all of the Boomtown Rats catalogue in Ireland and so, flush with this unexpected bonanza they added us to their roster. They brought over a young engineer from London named Steve Brown who worked for Phonogram and he was to be our producer.

There were no decent rehearsal studios around Dublin in 1978 so we ended up renting out a big cabaret venue on the north side of city called ‘The Stardust’. It was situated on the Kilmore road in Artane, a place I knew only too well as I grew up in the area.

The irony is that I spent my life trying to get out of the place and now here I was—back where I started.  As we were driving through Artane I spotted my old local, ‘the Goblet’ where my dad used to drink. Then we turned left on to Kilmore road and passed the high walls that housed the notorious Artane Industrial School run by the Christian Brothers.

I used to walk up Kilmore road every day with my twin brother Shay after school and we attended brass band rehearsals behind those cold, grey walls. One of the orphans taught me how to play trombone. He used to hold a sharpened pin on either side of my cheeks as I attempted to get a sound out of the mouthpiece. This was my first introduction to music lessons.

‘The Stardust’ was built on the site of the old Scotts jam and canning factory. When my brother and I walked up Kilmore road, we’d hear the factory siren go off at 5.00 pm and then all of a sudden a tidal wave of women, young and old would suddenly appear as we tried to walk against the flow. I suppose it was no surprise that after the drudgery of working all day in the factory, practically every one of these women would be dragging on a cigarette. I can still remember the overpowering smell of the exhaled tobacco smoke when it hit the cold, winter air as we fought our way past them.

And so it was inside this spacious cabaret venue where we first met Steve Brown. He was a young up and coming engineer from London. He would go on to work with ABC, Wham, the Pogues, Alison Moyet. the Manic Street Preachers and a host of others but back in 1978 ‘the Vipers’ would be his first production assignment.

My Future Was My Past

We started to set up our equipment. As I stood on the stage the ghosts of my past came back to haunt me. I had stood on this very spot less than a year earlier. Somehow I had found myself playing guitar backing a local duo doing the cabaret circuit. How could I explain this to my brothers in arms?

I looked over at Paul and Dave, veterans of the punk wars of ’77. They had been subjected to the phlegm, the sporadic outbursts of violence and even worse, the barbed comments from the Prog rock brigade. They were battle weary but surprisingly resilient.

The Viper’s first gig had been at a punk festival in June 1977 in UCD. They were on the same bill as ‘the Radiators from Space’ and ‘the Undertones’ as well as other local bands. During the Viper’s set, a young man was stabbed to death. It was said that the Vipers had incited a riot and that charges would be pressed. This scenario was still hanging over the band when I joined. Later all charges would be dropped against the band.

On Irish television, Bob Geldof had singlehandedly launched an attack on the Catholic Church, the State and every sacred cow that had ever blighted his existence. He lit the touch paper and every disaffected youth in the country started to storm the barricades.

The names of Pearse, Connolly and Collins meant nothing to these young punks. Their heroes were Rotten, Vicious and Strummer and instead of petrol bombs and guns these boys preferred power chords and Telecasters to get their message across. Ireland would never be quite the same again. It was somewhat symbolic that we young upstarts should now be on the stage of one of the bastions of show business in this town. The barbarians were now inside the gates.

And so it was I kept my ignoble past to myself, as I looked at my brave, heroic comrades. To tell the truth, I was looking for redemption. I had fraternized with the enemy. I had taken the easy money from the light entertainment establishment.

But now I was ready to atone for the sins of my past. After all it was only a few months previously that I had answered an ad in the Evening Press which simply said; ‘The Vipers require a bass player’ and within five hectic months I ended up in a band that did support to ‘the Jam’, made their first appearance on Irish television, cut their first single and embarked on a 10 date tour supporting ‘the Boomtown Rats’ around Britain. Before that, I had lived in London for a few months in those turbulent days of ’77. I had frequented ‘the Vortex’ and ‘the Roundhouse’ and numerous other music venues soaking up the new wave that was infiltrating sleepy London town. The Clash and the Pistols were nowhere to be seen but I got to see bands such as ‘the Vibrators’, ‘999’, ‘Siouxsie and the Banshees’, ‘the Ants’ (before they became Adam and the Ants) and Dublin band ‘the Radiators from Space’.

The ‘Rats’ Were Breaking In England

A guy I worked with knew of a band looking for a bass player so I said I was interested but around this time the Boomtown Rats had broken into the English charts with their first single and I’d heard that the Dublin music scene was buzzing. It was time to come home.

Back in Dublin and I was skint again. That’s how I got sucked into the lucrative cabaret scene. Then as luck would have it, I saw the ad from ‘the Vipers’ looking for a bass player and I knew it was my last chance to break out of this rubber chicken and chips hell. I had seen ‘the Vipers’ supporting ‘the Rats’ in the Olympia and I liked their attitude.

Fake It Till You Make It

I rang the number and spoke to the drummer Dave Moloney. I told him I had lived in London and then started to embellish my past achievements.  And so it came to pass that I wrapped my bass guitar into a black refuse bag and headed out to Dundrum for the audition. There was another bassist packing up just as I arrived. He had an expensive looking Rickenbacker and a fancy car outside. I thought about doing a runner but then Dave ushered me down to a shed in his back garden. I unwrapped my bass from the plastic bag.

‘No case, then?’ sneered the singer.
‘No’ I said, trying to appear nonchalant.
George, the lead guitarist eyed me suspiciously.
‘So you played some gigs in London?’ he said.
‘Yeah’ I said. ‘Only managed a few support gigs though’.

This seemed to impress them. Sure hadn’t Topper Headon used the same ruse telling the Clash that he once played with the Temptations. Later Joey ‘the lips’ Fagan would manage to join ‘the Commitments’ using the same method!

Boyle the singer said; ‘This one’s called ‘You had your chance’ and I got ready; legs apart, bass slung low and dived straight in. They threw a few more originals at me and I managed to acquit myself. ‘Ok’ said Boyle, ‘this last one’s called ‘Dying’.  It had a strange syncopated beat to it but I managed to nail it down and give it the kiss of life. And that’s how I got the gig. Seemingly about 20 bassists had come down for the audition and perished on this particular song. I packed my bass away and then we adjourned to Dave’s sitting room and watched TOTP.

Dave asked me my name before I left. The next day the manager needed to put out a press release but no one could remember my name. Boyle said; ‘I think he said his name was Dolan!’ And that was that. I was given a new identity and 25 original songs to learn for my first gig the following week.

Four months later and we are in ‘the Stardust’ taking the next step to fame and glory. Paul had written a new song called ‘I Got You’ which we had never even played live but he insisted this was to be our first single.

Steve stood out front and we played through our new opus. He got us to play it over and over again. And then some more. He set about making a few adjustments here and there. He knew exactly what was wrong with the song. He got us to change the intro, tighten up the verses and extend the ending. We played it again. He still wasn’t happy. ‘Too busy in the guitar solo, George. Let’s try it again.’

‘Dave, late with the fill coming out of the middle eight! Again’. ‘George and Dolan, backing vocals are out of tune! Again.’  And so we carried on late into the night and finally Steve declared himself satisfied and by the end we had to admit he was right. It sounded so much better. Exhausted, we packed our equipment away and slowly made our way out to the car park.

Tragedy at the Stardust

A few short years later ‘the Stardust’ would make headlines around the world when a fire broke out at a teenage disco and forty-eight youngsters perished in the inferno. But to myself, Paul, Dave and George, back in ’78 ‘the Stardust’ was just another date in our busy schedule. Little did we know that by 1980 the band would break up and our own dreams of world domination would also go up in smoke….