The Story Behind My First Solo Album: Red Letter Day 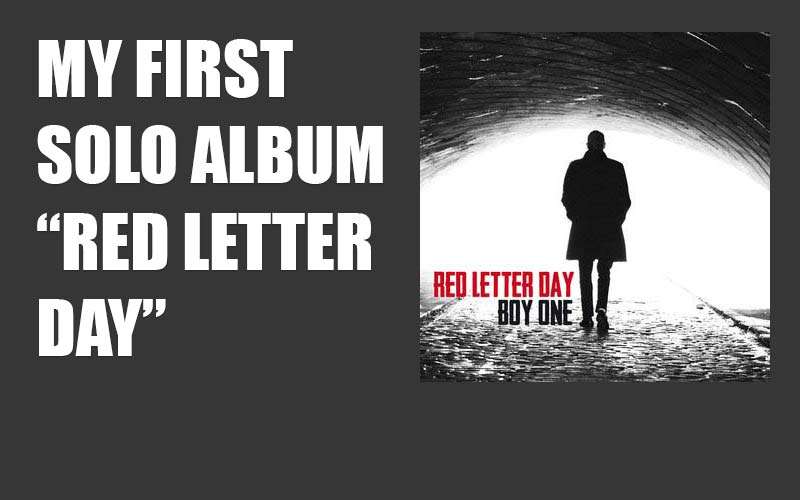 Released in 2017, ‘Red Letter Day’ is the debut album from Dublin recording artist, Boy One. The man behind Boy One is none other than Brian Foley. The bass player from the legendary Dublin band The Blades.

Looking back on it, I suppose the catalyst for finally bringing out my own album was the death of our keyboard player and honorary Blades member Pat Fitzpatrick back in April 2017.

It brought home to me the realisation that I could be dead and buried and there would be a drawer full of unrecorded songs never to see the light of day. Also, it didn’t help when my daughter mentioned the fact that the security guard at the pizza place she worked in had just brought out an album. Here I was, in the business for nearly forty years and nothing of my own to show for it.

I chose the name ‘Boy One’ because it is the title of one of my favourite songs from ‘The Blades’. Also, another reason is that being a twin, it is the custom after the birth when there are two males to tag them boy one and boy two. So I’ve had the name from birth you might say.

I resolved to change that.

I had my own home studio, a Protools set up on an iMac, an evolution midi keyboard, a telecaster and my trusty Precision bass. I had engineered the Blades album ‘Modernised’ in my studio and had soaked up various skills from producer Pat Donne who had years of experience working with the likes of Sinead O’ Connor, A House and Tony Visconti. Pat lent me a Waves L2 Ultramaximizer and so I was ready to go.

The first track on the album ‘Watch This Space’ was based on just four chords. I was listening to the charts at the time and was amazed at how many songs only used four chords. And what was more amazing was these songs used the same four chords for their intros, their verses, their chorus’s and even their middle eights. And so I attempted to do the same and surprisingly enough it turned out to be the poppiest song on the album. My producer Pat Donne came up with some nice spacey sounds and a really solid drum pattern in the choruses which contrasted with the thin, plinky keyboard motif running through the song.

Click here to watch the video for ‘Watch This Space‘.

‘Radio A.C.T.I.V.E’ was a ‘what if’ idea I had about a post-nuclear situation where there’s only one radio station left in the world but invariably the machines take over. Some people reckon that the machines have already taken over most of the pop music stations around judging by the homogenous playlists on offer..

My friend Niall Austin came over and recorded the deep, baritone talking segments. He attributes his rich, melliferous voice to his mother sending him to a private school.

The track ‘Miss Antarctica’ came about concerning an episode from the old 60’s Batman series. There was a storyline concerning a beauty contest and there was a Miss Iceland involved. And it got me thinking; what if there was a Miss Antarctica? And then it developed into missing Antarctica. Funny how the mind works. Pat put all sorts of strange bells and percussive effects in the background of the track to try and conjure up that vast, icy, eerie landscape.

On the track ‘No Man’s Land’, I got the Blue Brass in. Frank Duff on trumpet and Paul Grimes on trombone. That soon woke the neighbours up. This track drew on a tale of fractured love interspersed with World War I allusions. Pat came up with a stuttering drum pattern that had echoes of a military beat.

‘God’s Right Hand Man’; Another ‘what if’ scenario. What if the pontiff’s parents were still alive and watching him on television while sitting in a small cafe and bitching about their son who ’never writes or never rings…’ Some of the reviews likened it to a Kinks song which was a nice compliment. I suppose the rolling piano and low trombone notes did give it a music hall-type connotation.

‘Red Letter Day’ lent its name to the album title and the fact that I managed to get the album out was my Red Letter Day. A song of optimism and the ever wishful dream of that lucky day arriving sometime soon. Frank Duff played a lovely trumpet solo reminiscent of those  Ennio Morricone scored westerns which seemed to fit in perfectly.

On ‘Love Never Sleeps’ my old bandmate from ‘the Harvest Ministers’ Padraig McCaul arrived in with his saxophone and laid down some nice sultry riffs which had echoes of an old film noir. His solo sax starts the song and also ends the track on his tuneful, improvisation. The song started life as a slow ballad but a few days before recording it I changed the tempo which didn’t please Pat as he had already laid down a slow drum pattern. Still, he relented and we managed to preserve that sleepy ambiance in it.

‘The Clowns Have Taken Over The Circus’ is probably the most political song on the album. When you’ve lived as long as I have you soon get fed up with politicians and their merry-go-round. It’s a noisy, glam rock,  thumping affair with echoes of Slade and Sweet bubbling under. A fun track to do. Guitar amps were turned up to eleven and Pat Donne got in Animal from the Muppets to do the drums.

The Blue Brass gave ‘Is That Too Much To Ask?’ a nice lift. I wanted a Motown-type vibe to the track. Not only did I have trumpet and trombone on the track but Padraig put in some great interweaving sax riffs which glued the whole thing together. I also had great fun throwing in some Abbaesque piano and some Funk Brothers guitar licks.

‘Emerald Blues’ starts off with a lone, plaintive violin played by my old mate Ciaran Crilly, conductor of the UCD orchestra and all-around good egg. It then explodes into a driving rock song shining a light on our dear old Emerald Isle and its obsession with the myths and legends of the past. The song builds to a climax with a loud yet melodic guitar solo which then descends into chaos and ends with a pub singalong which fades out on  Ciaran’s sad violin tune echoing the chorus melody. And so endeth the album.

I probably should have put more preparation into planning out the whole project. I didn’t know enough about how important it is to pitch songs in certain keys or the workload involved in playing guitars, bass and keyboards on every track and also doing all the vocals and harmonies. Then there was the added stress of coming up with brass and string arrangements. But I can’t complain. My babies were lying in a drawer for years in suspended animation but then they were given life in Poddle Park studios and are now roaming the soundscapes of whoever took the time and trouble to find them on Spotify or in Tower records or maybe that one radio station that is still broadcasting out there..