Ministering To The Faithful 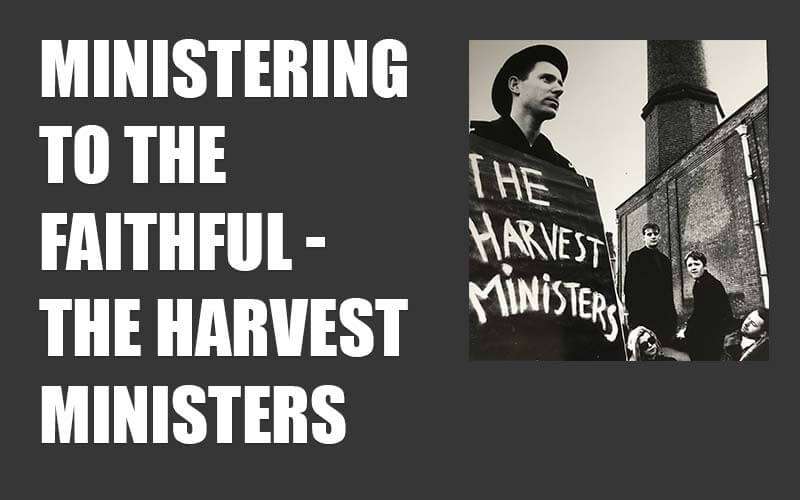 The Ministers were unusual in the fact that they had three different lead singers and the music was very quirky with odd, jazzy chords, melodic sax riffs, and lyrics that lived up to their strange song titles such as; ‘I hang from a great big oak’, ‘Oliver Cromwell,’ ‘Six o Clock is Rosary,’ ‘Railroaded,’ ‘a Carriage of Villains’ and ‘Forfeit Trials’ to mention a few. Subject matters are not heard on many Dublin stages or any stages for that matter.

In a song called ‘Commoner’ the songwriter and main man Will Merriman would let out these ear-piercing screams near the end of the song which was totally unexpected as the song itself was a gentle hypnotic piece.

I remember at one particular gig, we were playing upstairs in ’the International bar’ and when Will began his anguished screams the barman came running up the stairs, a look of fear on his face as he was convinced that someone was being murdered.

At the start of a gig, it wasn’t unusual for Will to recite some poem he’d just written such as ‘justice for the mices’ or waltz with Geradette or Maeve who both sang with the band at different junctures.

We released two singles ourselves and Tom O Brien, he of the Mountain Climbers, filmed two lovely videos for the songs shot on super 8 format. The band was augmented by ex In Tua Nua violinist Aingela de Burca and we did a Sunday night residency in Whelans, which was a new venue back then in Dublin.

Shortly after that, the band got signed to a small English independent label; Sarah Records, and we recorded our first album entitled ‘Little Dark Mansion’. We even did a few gigs in London to promote it.

Needless to say, the Harvest Ministers were an acquired taste. Some of the lyrics and melodies were very bizarre and there could be changes of tempo leading to different keys and chords which defied gravity all in one song.

One critic who championed the Ministers was Michael O Hara from Hot Press. He once referred to one of Will’s songs ‘Grey Matters’ as ‘a slice of lyrical perfection where the water doesn’t just fall down the side of a hill, ‘it wrestles with the slopes (going downwards like our hopes)’

He wrote of how ‘the songs were made for quiet, sensitive boys like him, that spoke of girls who did your world the world of good. The vocals were a whisper, the violins soared, the piano underpinned everything gorgeously, the melodies veered off in unexpected directions…’

The band couldn’t be categorised and were never going to fit into the mainstream but that was what attracted me to them in the first place. The gigs were unique experiences. The ramshackle nature of the band meant no two gigs were alike. There were setlists but Will never adhered to them and he often surfaced with a new song if the notion took him. Or he would tell some meandering, cryptic tale while tuning his guitar.

Some of the best gigs were not in pub settings but in venues like the Alliance Francaise where we would play in a darkened room with the tables illuminated with candles. Or (the now demolished) Andrews lane theatre and another ideal setting was the Project Arts centre. These places seemed to suit the mood of the Minister’s music which at times was so fragile it threatened to disappear into the ether.

You Do My World The World Of Good

After three singles and one album I left the band in 1993. While the gigs were enjoyable I didn’t like the travelling anymore and so I took a sabbatical. The Ministers never did conquer the world but they did go on to sign to Setanta records and tour around Europe.

Today, Will is still writing and recording and has released six albums and countless EP’s under the Harvest Ministers name. The songs are still enigmatic and off-kilter as he ploughs his own lonely furrow. He’s one man on a mission to minister and long may the gospel according to Will continue in this increasingly homogenised pop world.