Memories From The Black Rose Tour With Thin Lizzy 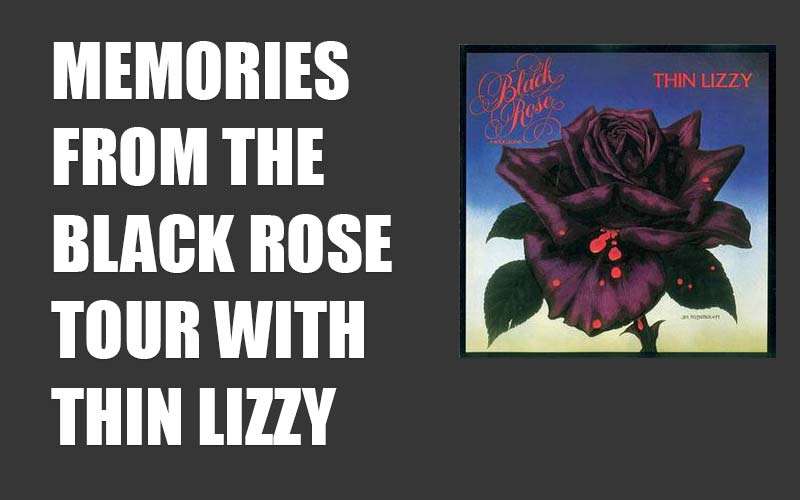 Black Rose, Red Devils and Dublin in the Green

The night before the Manchester gig, Philo came over to us and said; “Youse can stay at me ma’s place”. Philo’s ma Philomena ran a small hotel in Manchester called the Clifton Grange Hotel, and it was a popular stopping off place for bands and showbiz folk. In other words it was pretty basic.

The rooms consisted of a mattress, a duvet, low lighting and no questions asked. Siouxsie Sioux and the Banshees had been recent residents. Like I say, no one ever got turned away.

The gig in Manchester had gone okay for us. We managed to play the whole set without being bottled off. Afterwards back at the hotel, Philomena held court behind the bar, which was in the basement. It was her usual clientele; criminal types, dancers, comedians and out-of-work actors. Suddenly a hush descended on the room as a tall, good-looking athletic type walked down the steps accompanied by a girl on each arm. It was none other than Manchester United player Gordon McQueen who had left Leeds the year before and was now playing for Man U. Phil greeted him like a long-lost brother. Needless to say, Phil was a big Red Devils fan. He even had shares in the club.

The bar usually opened at 2 00 am, bedtime was 6 am and breakfast was midday. If you got up later you could go into the kitchen and make your own. A group of criminals known as the Quality Street gang were regulars. It’s believed that the song ‘the Boys are back in Town’ was inspired by them.

Lizzy were great to hang out with. In Philomena’s hotel, like anywhere else the band and crew socialized together.

Guitarist Gary Moore was a bit shy and spent most of his time with his Australian girlfriend Lisa when not turning up early at sound checks and checking out his guitar sound. He had a favourite guitar, a Gibson that the legendary Peter Green had given him and sometimes he’d get our guitarist George to play it while he walked around the empty hall listening to its various tones.

Brian Downey was a gentle soul. Liked to go fishing in his spare time but once he got behind a drum kit there was hell to pay. Our drummer Dave was having trouble with his drum pedal during the tour and when Downey heard about it he gave Dave a present of a brand new Tama bass drum pedal.

Philo looked like a rock star no matter what time of the day you met him. He lived it 24 hours a day. Though he was surprisingly insecure underneath it all. I remember he asked Paul (Boyle) at one stage; ‘Do you rate me man?’

One night he gave us advice on how to work an audience. ‘Glick the chicks’ he’d tell us. ‘If you spot a good-looking chick halfway down the hall, glick her and every chick in the place will think you’re giving them the eye.’ Sound advice but with Lizzy fans being almost 95% male this proved to be a lost cause.

Another night at a soundcheck Phil tried to sell me his Marshall amplifier. He was turning all the knobs and talking it up and I hadn’t the heart to tell him that I hadn’t got a pot to piss in. Seemingly Phil had bought some state-of-the-art equipment and his pride and joy was a new flanger which he had heard Jean- Jacques Burnel (bassist with the Stranglers) using and this was his new bass sound for the tour.

On one of the gigs, our driver Dave the Rocker celebrated his 30th birthday. When Phil heard about this he sent him a special present—an expensive bottle of whiskey. He even let the Rocker introduce us on stage one night and the Rocker took out his mouth organ and played the theme tune to the ‘old grey whistle test’ before we came on.

The Black Rose tour was a sell-out and Lizzy delivered a blistering set night after night. They were utter professionals.

We didn’t even have a manager or a record deal yet Lizzy looked after us while they could have had any one of a million bands willing to pay to get on their tour. The money we got from the gigs paid for our accommodation and we stayed in every cheap fleapit across Britain. We would have starved to death only Lizzy let us avail of their catering while on tour. A husband and wife team ran it under the name of ‘Bubble and Squeak’ and we would saunter down to the catering area at any time and have our pick of whatever delicacy was on the menu.

This all took place almost 45 years ago but I can remember those times like it was yesterday. Still, there are some tales that must remain untold.

The old adage ‘what happens on tour stays on tour’ unfortunately applies here and so alas some of the best stories can only ever be related in a darkened room….with a lawyer present.

The last time I met Phil in London was at his stag night. It was held in the Grosvenor House hotel on Park Lane. The Irish ‘Murphia’ were out in force. There were members of the Chieftains, Stiff Little Fingers, ourselves and many others at the bash. There was an assortment of rockers and axe men present including Simon Kirke (Free) and Mark Knopfler (Dire Straits). See more photos of Phil’s stag night here.

There was a free bar, strippers, and a buffet to nourish us through the night. Though my abiding memory is of Phil at the end of the night, sitting in the corner playing the acoustic guitar belting out some Irish ballads. I remember him singing  ‘the Merry Ploughboy’ and we all joined him in the chorus; ‘Oh we’re all off to Dublin in the green in the green….’

And that’s how I remember Phil;

A mop of black curls, a big smile on his face and he happily singing  old Irish folk songs on his stag night.