How We Got To Open For The Boomtown Rats 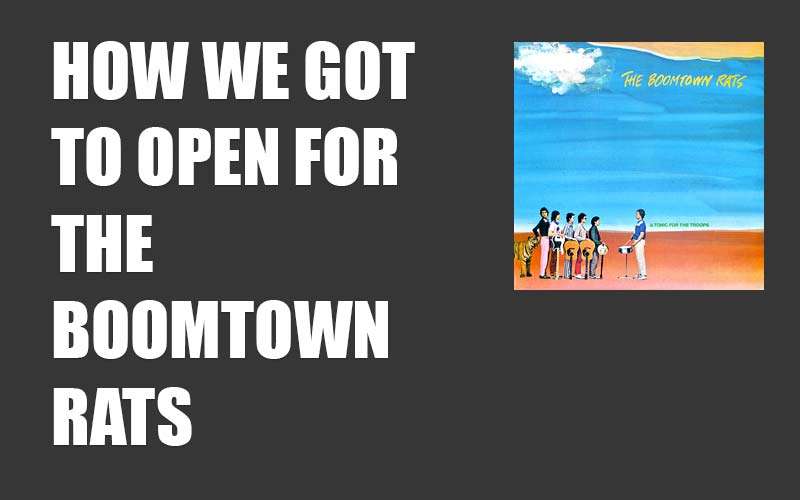 How did a band from Dublin with no money, and no major record deal get to open for the Boomtown Rats on the Tonic For The Troops tour, and play Hammersmith Odeon?

In December 1978, four months after joining the Vipers I found myself on a whirlwind 11 date tour around England, Scotland, and Wales supporting the Boomtown Rats. Three months previously I had been in the audience at the Olympia theatre in Dublin watching The Vipers support the Boomtown Rats and now here I was in London with my fellow Vipers ready to tour Britain with the very same Rats.

The Boomtown Rats were number one in the English charts with their single ‘Rat trap’. After releasing five singles they had finally got to the top of the charts. They were the first Irish rock band ever to get to number one in England. People often wonder how an unknown band with no major record company backing managed to get support to the number one band in England at the time. As Arfur Daley used to say; ‘a favour sown is a favour reaped.’ In this case, it was a favour that Geldof owed to our drummer Dave Moloney.

Back in ’77, the Rats’ drummer Simon Crowe quit the band. Dave auditioned for the gig. There were twelve other drummers at the audition and it was held down in Mulligan Records in Templeogue.

Dave was asked back for a second audition and as he waited outside he met the Rat’s lighting technician Phay. When he asked Phay what the story was, Phay said to him ‘you were the only one asked back’ and indeed Dave got the job.

Geldof gave Dave two live tapes; one from ‘Morans’ and the other from ‘the Dalkey Island Hotel’. Dave learned the numbers off. There were some originals and some Dr. Feelgood and Bob Marley etc. He rehearsed down in Mulligan records for a few months and recorded some demos with the band but then Simon Crowe had a change of heart and decided to come back. The fact that the Rats had just been signed to Ensign Records in London may have been a factor….

A Rare Bird; A Promise Kept In The Music Industry

Geldof and manager Fachtna made a promise to Dave that if there was anything they could do to help in the future that all he had to do was ask. So when the Rats got to number one Dave made the all-important phone call. And that’s how The Vipers got the support tour.

Thanks to Ross, We Hit The Road

For a band with no major record company support we still managed to fly over to London, stay in decent hotels on the tour and hire a roadworthy tour bus; All thanks to our manager Ross Fitzsimons who put up the money for the tour and never got the credit he deserved for it. As we set off on the trek there were the four of us in the band, our manager Ross, our roadie Sully and our faithful driver Dave the Rocker.

A Tonic For The Troops

The Seasonal Turkey Tour started outside London in Bracknell. Later we headed for Exeter in Devon. Down to Cardiff in Wales. Back to London to play the Hammersmith Odeon. Then up to Glasgow, back down to Lancaster in Lancashire, on to Manchester and back to London to the Rainbow. It was a hectic fortnight. The promoter put on a second night in the Rainbow when the first one sold out. The Rats were now fully-fledged pop stars and so the audience was made up mainly of teenage girls. We went down surprisingly well seeing as we were an unknown band with no profile in England. Paul du Noyer gave us a mention in his review of the Hammersmith Odeon gig;

‘This venomous ensemble acquit themselves deftly, snake some action and they’ve matured in the past half year from spikey, uncertain identipunks into a four-square R ‘n’ B machine.’

The Rainbow sold out so another date, December 14th was added.

We used to watch the Rats from the side of the stage each night as Geldof prowled his domain and reveled in the adulation and screams. The set consisted mainly of the first two albums and these songs were raw and uninhibited which suited Geldof’s voice.

From playing clubs in Ireland to suddenly getting to play the Apollos and Odeons around Britain was quite a shock to the system. For the first time, we had our own band rider, nice dressing rooms, crates of beer and tables of food for us to enjoy each night. The Rats looked after us and Geldof would often drop into our dressing room and wish us luck. Their lighting technician Phay ‘Taylor’ McMahon got to know our set and always went out of his way to give us a good light show. Phay later set up his own lighting company and designed shows for Paul McCartney, George Michael, Aerosmith and many more well-known artists.

The Rats manager was Fachtna O Kelly; like Geldof he was tall and striking looking; both of them were always immaculately dressed. Fachtna used to wear these amazing-looking shoes. He told me an exclusive shop in London sold them and that Bowie had bought a pair there as well. The material in the shoes was made from the same fabric as parachutes. Needless to say, after the tour ended I got all my savings and treated myself to an early Christmas present! They were my stage shoes for quite a few gigs afterwards.

Missing Out On Promoting Our Single

We had recorded our debut single ‘I’ve Got You’ back in Dublin a few weeks previously and were frantically trying to get some copies over for the tour. It had been voted record of the week in the English magazine ‘Sounds’. Between the incompetence at the Irish end and the customs at Heathrow airport we only managed to get hold of some singles on the last date of the tour. It was a shame as we missed out on selling them at all the venues we played across Britain.

Sometimes as we crisscrossed the country on the tour, we would be overtaken by the Rats in their tour bus and invariably they’d be at the back of their bus, trousers down giving us a good moon. I remember we passed them one time and we put  up a sign against our window which read; ‘Geldof…wipe your ass!’

In the Hammersmith Odeon, we played our debut single for the first time to a London audience but in the middle of the song, there was an explosion of white foam onto the stage. The Rats were all down in the orchestra pit letting off fire extinguishers at us! We bided our time to get our own back on them. During the tour, a saxophonist named John Earle used to come on to play the solo in Rat Trap. It was the highlight of the night. John was very recognisable from the large moustache he sported.

Geldof Effed and Blinded Dave Off The Stage

On the last night of the tour in the Rainbow, we got our revenge. As Geldof gave the big introduction to bring John on, little did he know that Dave Moloney had gotten hold of a toy saxophone and had stuck black gaffa tape over his upper lip. It was Dave who then strolled on from the wings. For once Geldof was lost for words but he recovered quick enough as he effed and blinded Dave off the stage. Jokingly of course.

John Earle also toured with Thin Lizzy; he played the sax solo on “Dancing in the Moonlight” on the “Live and Dangerous” album. He also played with Graham Parker and The Rumour for many years.

Last night of the tour. It was the end of a great adventure for us. Still, we had raised our profile in England and so we returned in the new year and recorded a John Peel session and played a few gigs around London. I remember when we played the Music Machine, Geldof arrived down and spent the night working the spotlight for us. He badly wanted us to succeed.

Click here to listen to The Vipers John Peel session.

And though it was not to be, I have lovely memories of the Seasonal Turkey tour. Bob may be Sir Bob now, a pillar of the establishment, a living legend, but to us, he’ll always be that cheeky pup who used to moon at us on the motorways of Britain.