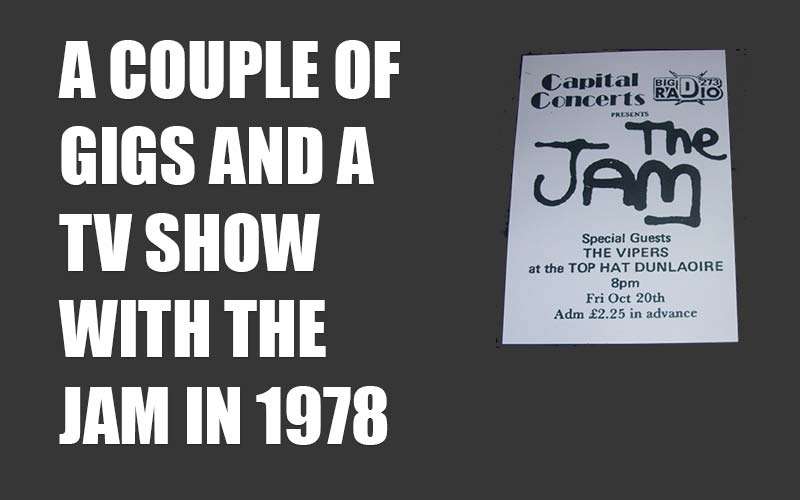 In October 1978, I was playing bass with the Vipers when we got a support slot with The Jam on their two gigs in Ireland; in Dublin (Top Hat) and in Galway (Leisureland). We also appeared with the Jam on a television programme called ”Our Times’ on RTE. The Jam performed ‘David Watts’ and ‘Down in the Tube Station at Midnight’ while we did a song off our new demo called ‘You’re so Strange‘. It was the Viper’s only TV appearance but the tape got erased at some stage in RTE.

The Jam were promoting their make or break third album; ‘All Mod Cons’ and the Vipers had a ringside seat watching them perform brand new songs like; ‘A’ Bomb in Wardour St’, ‘Billy Hunt’ and ‘Mr. Clean’. The band sounded great and looked stylish in their mohair suits. The Jam were managed by Paul’s Dad, John who was a big, stocky individual who looked like he’d been in a few scraps in his day and wouldn’t be averse to giving you a bunch of fives for the least little grievance.

One thing I remember from those dates was when Paul, Bruce and Rick used to finish their last number, they would run off the stage and a roadie would have a lighted cigarette ready for each of them as they came running past. To us lowly Vipers, this was the big time.

Paul Weller was quite shy. His girlfriend Jill was over with him and he spent most of the time with her. He was only twenty years old. Just two kids in love. Though I do remember George, our lead guitarist, sitting down with Weller at some stage after the soundcheck and they started trading some guitar riffs. They were both massive ‘Who’ fans. Bruce and Rick were very sociable. I remember being surprised when Bruce and Rick started complaining to me about the price of a bottle of coke in the bar of the hotel they were staying in. They were drinking whiskey and coke at the time. Even back then alcohol was so much dearer here than in England. Bruce was very generous to me all the same. He had just gotten a sponsorship deal with Rotosound and he had a flight case full of their bass guitar strings. He very kindly gave me a few packets.

It’s hard to believe but we nearly got kicked off our little mini-tour with the Jam after the first gig in the Top Hat in Dunlaoire. It just so happened that Paul, Bruce and Rick had nice electric fans mounted in front of them while they were on stage. I suppose they needed them as they wore heavy suits and shirts and ties when they performed.

I remember we were near the end of our set and going down really well when George Sweeney, our lead guitarist launched into one of his blistering guitar solos. His fingers were squeezing the life out his strings and he was throwing all sorts of shapes.  He ended his solo on some impossibly high note and kicked out his foot at the same time. Unfortunately, his foot connected with Paul Weller’s precious electric fan, which went flying across the stage.

Well, all hell broke loose and the road crew were lining up at the side of the stage giving us menacing looks. The fan was in a crumpled heap damaged beyond repair. When we finally came off the stage there was a lot of bowing and scraping and apologies. John Weller suddenly appeared, eyes bulging, veins throbbing in his neck. Explanations were sought. More profuse apologies. Some restitution was offered. Finally, it was accepted that there was no malice intended and with that we were back on the tour. Mind you, Paul Weller didn’t half sweat that night.