821 Days…The Long Journey Back To The Academy 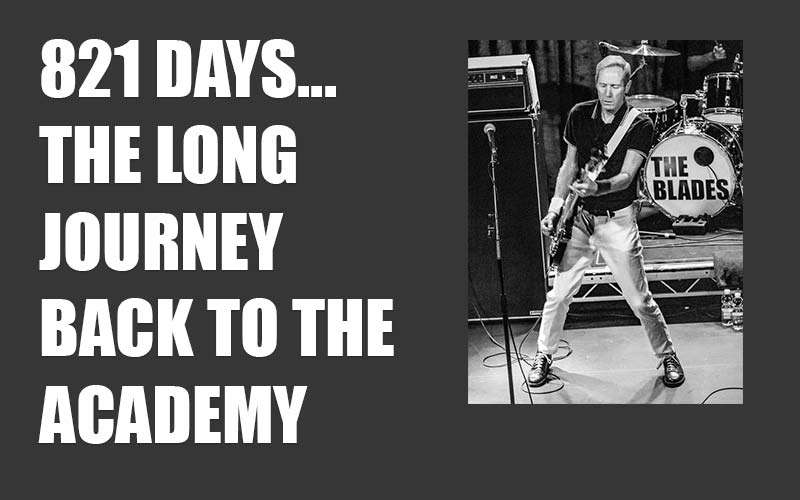 In November 2021, Paul, Jake, and myself met up for our first Blades rehearsal in almost two years. And what a strange two years that was. The new normal had been mask-wearing, travel restrictions, hand sanitizers, zoom calls, lockdowns, mass vaccinations, antigen tests, PCR tests, and if you were unlucky, a stay in the ICU, or worse; a sparsely attended final send-off. It was such a good feeling to finally be able to plug our guitars into our amps and for Jake to beat the living daylights out of his drum kit once again.

December 2021….The Academy Show That Never Was

We had booked six rehearsals for our December 19th gig in the Academy. Paul, Jake and I took the first few rehearsals to make sure the foundations were rock solid and then in the later rehearsals the rest of the band joined us.

But then the rug was pulled from underneath us. After we had done five rehearsals, the government announced another lockdown starting on December 13th. Just a week before our long-awaited gig. We were devastated. Back to the new normal. Another Christmas. Another lockdown.

In the new year, the government lifted restrictions and the hospitality sector got the green light to commence business again. MCD rescheduled our gig for March 19th.

We had done five rehearsals just before Christmas so we did another three leading up to the gig. And so it was two years and three months before we stepped out onto a Dublin stage. Our old mates ‘The Trouble Pilgrims’ had been booked to support us but unfortunately, some of the band came down with covid and so Pete Holidai and Tony St Ledger soldiered on as a duo and christened themselves ‘the Double Pilgrims’ for the night. With just two guitars they still managed to deliver a blistering set and even showcasing some tracks from their fab new album ‘Blood, Glass &Gasoline‘.

A Full House and an Unforgettable Night

8 45 pm and Conor starts the opening riff to ‘Last Man in Europe’, After a few bars Jake joins in on bass drum, then the bass comes rumbling in, and finally the sound of the brass is like a call to arms as they punctuate the packed venue with their big, all-embracing sound. I look out at the heaving mass of people in the darkness and suddenly the trials and tribulations of the last two years melt away. It feels great to be back on stage.

I have some tuning problems so Paul sings a snippet of a Christmas song while I sort it out. We then launch into ‘The Reunion’. One of the greatest B sides ever committed to vinyl. Every song is a winner on the night which is a testament to Paul’s great talent. The war in Ukraine is not forgotten and Paul makes a nice speech about the situation and then dedicates the Tom Petty song ‘I Won’t Back Down’ to the brave citizens over in that blighted country.

Before we know it we are at the halfway stage and Paul performs two songs on his own; ‘Animation’ and ‘Some People Smile’.  Again the crowd all join in and know every word.

Of course, we end with ‘Downmarket’ and just about everyone in the audience can identify with the lyrics. Written in 1981 but still timeless. We throw in the old Motown classic ‘Heatwave’ as an encore and then we leave the stage and collapse exhausted in the dressing room.

We all agree, it was probably one of our best gigs.

All the Academy ’22 photos courtesy of Billy Cahill.