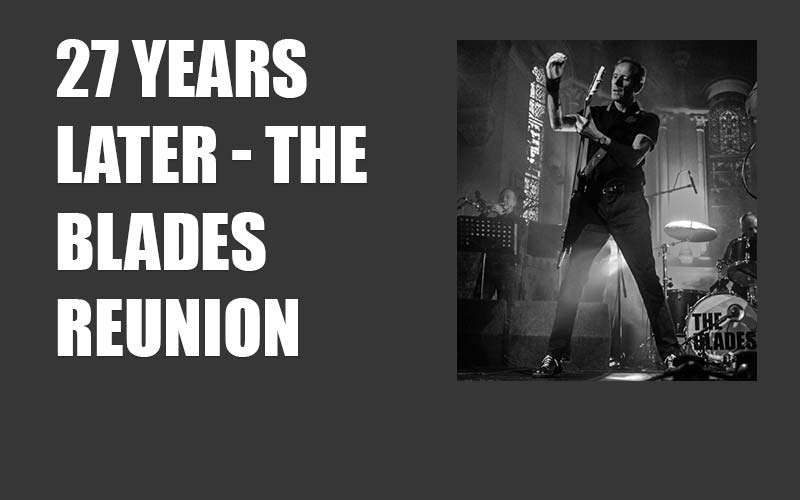 The Blades last gig in Dublin was in the Olympic Ballroom in January 1986. For five years we had given it our best shot but with our last throw of the dice, lady luck had deserted us. It would be twenty-seven long years before the band would perform again on a Dublin stage under the name The Blades.

The catalyst for this surprising reunion would be a Phil Chevron tribute concert in the Olympia Theatre on August 25th, 2013. Phil, though terminally ill, attended the concert and had requested that some of his favourite artists would perform for him.

Watch some videos of the Phil Chevron Testimonial.

Paul plugged in his electric guitar and launched into the old Radiators’ song ‘Enemies’ which went down well. For his only other song of the night, he performed a blistering version of ‘Downmarket’ which had the whole audience singing along. And though the night was tinged with sadness (Phil died 6 weeks later) it was also a night to celebrate Phil’s lasting legacy.

Getting The Band Back Together

For Paul, knocked out with the reception he received, finally made the decision to get The Blades back together again.

Rehearsals though were tougher than expected. It was a big ask trying to crank up the machine and those creaking parts needed a lot of oiling and greasing and of course, rust was widespread. However gradually the working parts came together and we were astonished to find out we’d sold out the Olympia. A second gig was added and we couldn’t believe it when that also sold out. December 13th and 14th would be our dates with destiny.

Jake, our drummer recalls standing in the dark at the side of the stage waiting to go on; Seven nervous lads; unbelievable noise from the packed house. Suddenly the stage manager shouted; ‘Ok, boys,….you’re on! Jake remembers thinking; ‘I’ve waited 27 years to hear those words….’

I myself remember the roar that greeted us as we hit the stage. I looked out at the auditorium as a wave of goodwill washed over us. The testosterone levels were sky high; there was a smell of warm beer in the air and unbelievably, grown men had somehow squeezed themselves into their old Fred Perry shirts.

Paul played the first two notes of ‘Last Man in Europe’ and it all came to a great crescendo when Paul Grimes and Frank Duff kicked in with their big brass sound which almost lifted the roof. The crowd erupted. They knew every word to every song. They clapped, they cheered, they danced and hugged us to their hearts like long-lost friends.

We had played as a three-piece, a four-piece, a five-piece (with brass) but now for the first time, all seven of us were together on stage, finally doing justice to Paul’s exquisite songs.

There was a poignant moment when we all left the stage and Paul serenaded the crowd on his own. Just one man and his guitar. He played a lovely version of ‘Everything I Own’ and dedicated it to his recently departed dad.

Karl Tsigdinos had introduced us on to the stage on the first night. He had championed the band from the beginning and had even designed the famous Blades logo. He now presents one of the most eclectic radio shows around; Shakin’ Street on Dublin City FM.

Dave Fanning introduced us the second night and he was another one of the good guys who promoted us from the word go. The second concert was recorded and released as a live album the following year. The Blades were back.

Enjoying Life On The Festival Circuit

The Christmas gig would become an annual staple. But we also did the festival circuit as well; The Electric Picnic (with The Stranglers, Chic, Clean Bandit, etc), The Groove Festival in Wicklow (with Aslan and the Four of Us, etc), and the Daytripper in Waterford (with UB40).

When we played the Electric Picnic in 2014 it was the first festival we played since Lisdoonvarna in 1983. The contrast couldn’t have been more stark. Back in 1983, backstage at Lisdoonvara was basically….the back of the stage. There was one stall where some guy was selling warm cans of Heineken for 50p and that was pretty much it.

Fast forward to the Electric Picnic thirty one years later, and backstage we had our own dressing room. There was a pop up restaurant nearby that served us three course meals. There were shower and bathroom facilities. And if you were feeling stressed, there was a chill out tent that was soundproof complete with aquariums, piped music and plush settees. We had the use of golf carts if we needed to get around the site and when we set off to play our gig, a mini bus pulled up and drove us over to the marquee.

Still I would have killed for a warm can of Heineken afterwards….

“Then Came You” on The Late Late Show

In 2016 after 30 years we finally recorded a follow-up to ‘Last Man in Europe’, the much anticipated ‘Modernised’ A more mature and mellow collection which showcased Paul’s unerring talent for melody and introspective lyrics. Appropriately enough, the track which garnered the most airplay was a slow, melancholy number entitled ‘Then Came You’ which we performed on the Late Late Show complete with a string section.

On April 19th, 2017, our dear friend and keyboardist Pat ‘Fitzy’ Fitzpatrick passed away after a short illness. He had manned the barricades with us back in the ’80s and was a much-loved addition to the band.

I remember when he was very ill and I asked him how he was (he was going through very heavy doses of chemotherapy at the time). Typical of his dry Belfast wit he replied; ‘Och I’ve had worse pints!’.

A year later we were all shocked to hear of Lar Cleary’s death in Japan. Lar had formed the Blades with Paul. Just two young kids from Ringsend with nothing but pure determination and dreams in their back pockets. Of the two, Lar was a more complex and introverted individual. By 1982 he’d tired of the whole music business and he set off to where the sun rises, making the odd excursion home over the years.

At least we have the pleasure of his legacy where his country-tinged guitar playing adorned the first two classic Blades singles on Energy Records.

The Rock Museum Hall of Fame

In 2018 The Blades were inducted into the Rock Museum Hall of Fame. Jake donated his old snare drum which had been pummelled into submission and had earned the right to live out its twilight years in a more gentler environment. Paul donated his much ravaged Fender Telecaster and I handed in various items of memorabilia. It was with a heavy heart but we knew they were going to a loving home and would be treated with dignity and respect.

Then the pandemic struck. Our guns lay silent for two whole years.

And then we got the call; Converge at the Academy on Sunday, December 12th at the appointed time.

And so we march on like old soldiers; still fighting our own corner; still singing with real emotion. And though the light grows dim, and it’s getting dark, too dark to see, we don’t intend to go gently into the night….